Site Overview:
The North Sea has long been the site of important European shipping lanes as well as a major fishery. The sea is a popular destination for recreation and tourism in bordering countries and more recently has developed into a rich source of energy resources including fossil fuels, wind, and early efforts in wave power.

As part of an upgrade to the flowlines into separator unit on a key asset, the engineers at a major Oil and Gas End User in the North Sea identified it was necessary to perform on-line testing, in the form of Partial Stroke Testing on one of the main Shut Down valves to be installed. This was a requirement for the system to reach the required SIL2 classification. However, The End User’s engineers also identified the considerable impact to asset operations that an unplanned trip, due to an issue occurring during the Partial Stroke Test (PST), would cause.

Following discussions between the End User and Imtex Controls Limited, who manufacture the long established and highly reliable Camtorc Actuator range, it was identified that the Camtorc TripGuard System (patent pending) would provide both the required PST functionality and assurance that an unplanned trip would not occur. This has enabled the End User to deliver the required SIL2 classification without compromising operational integrity.

The Solution
The situation experienced by the specific End User is common to many other End Users Worldwide. The concept of Partial Stroke Testing (PST) has been widely promoted to improve efficiency, reliability and safety on Shut Down Valves. Unfortunately, many End Users chose not to utilise PST capabilities because of the associated risk of a Spurious Trip occurring, causing loss of production and other operational issues.

The introduction of the Camtorc TripGuard system eliminates this Spurious Trip risk, thus allowing End Users to get the full benefit of PST implementation. 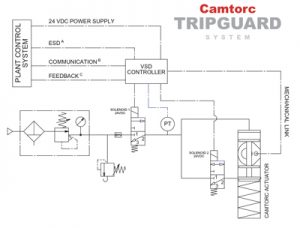 The Result
The Camtorc TripGuard System is now installed and is operated as any normal Shut Down system. It was fitted to the valve and connected to a pneumatic supply. A digital output (A) from the Safety System is supplied to the actuator assembly to control the main ESD Solenoid. Although it is terminated in the VSD Controller, the signal to the Solenoid passes straight the VSD unit without the integrity of the Safety loop being diminished (product certified to this effect). Positon feedback (C) can be provided to the Plant Control System from independent limit switches in the VSD Controller, or via an analogue output from the Controller.