Another From The Vault

Its not often you get to see infrastructure projects as they occur as well as the history and people behind them, I recently came across these pictures in our collection and thought I would share. 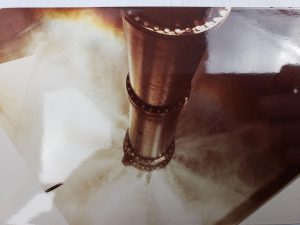 Most Melburnians would have driven past the Melbourne Water reservoirs located at High Street Reservoir, these pictures were taken during construction, products pictured — Vertical Discharge Regulating Valve and if I am correct manufactured by Boving, the Electric Actuators are Limitorque SMB series modulating with Lamonic Thyristor modulating control units, which were built in Melbourne, the gentleman pictured is George Pryde Patterson. Mr Pat (as he was referred by) was MD and Director of Kent Instruments and involved with Budenberg Gauges, Davies Shepard and Pyrometric Services in Australia, he went on to form Pryde Measurement, Control Engineering and United Electric Controls, and as I dig deeper into our vault, I have a copy of the letter (dated 1958) provided to Mr Jeremy Fry, founder of Rotork with an evaluation of the Australian market, which later resulted in John Valves becoming Rotork’s first overseas agent.

I am sure Mr Pat would be proud to see Limitorque still an integral part of infrastructure projects. #acrodyne #limitorque